It's easy to feel trapped and chained down with illness, disability, or whatever your earthly trouble may be.  However God really impressed on my heart the other day that while I may be very limited in my physical freedom nothing can take away the liberty that is in my mind, or especially my soul.  After all isn't the human heart one of the deepest wells in the world?  I can't drive a car, or live on my own, or run a marathon.  But I can do many other things using the brain He gave me, even if it's just dreaming when I'm too sick to do anything but lie still.

So never let anything keep you from feeling free, because there is more to independence than the physical.

Never be afraid to trust an unknown future to a known God.
-Corrie Ten Boom

I feel so incredibly, inexplicable, completely blessed.  Even on days like today, when I've had several hard ones in a row, I just can't forget how good God is because of how much He's given me in the past few weeks.

Be ready for as more photos than text ;-D

I had my clinics in Milwaukee June 5th, and to get there we were granted an Angel Flight.  Meeting the pilot and his wife was so incredible, and saying goodbye was emotional!  He also took the time to bring us home two days later, despite the fact that he is running a huge company.

Once we arrived at the airport Monday morning, it was a whirlwind of happy chattering that I cannot remember, and sights that I won’t forget.  A perfect blue sky, the warm sun glancing off the white wings of his perfectly clean plane.  The iridescent paint on the black engines, the tight weave of the carpeted steps leading into the plane, the feel of the leather on the hand rails.  The smiles on everyones' faces. 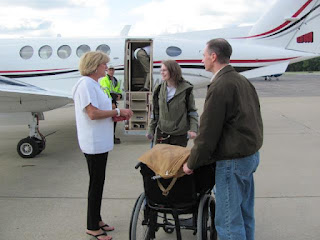 We were also so fortunate as to get a room at the Ronald McDonald House of Eastern Wisconsin, this RMH is really beautiful, large, and always full!  But God definitely was ordaining every step.  The volunteers were so helpful, and supplied everything they could for me as well as showering us with gifts (as they do every guest that comes).  We spent the Monday afternoon sightseeing East Milwaukee, and around Lake Michigan. 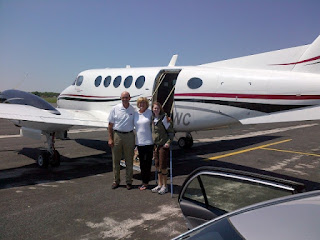 I was pretty sick that night after such a big day, not to mention past few weeks, but the next day was feeling okay and was so happy to get to spend time before and after my appointment with a friend whom I've known for years but never had the privilege of meeting!  She too has POTS.  It was really difficult to say goodbye, we talked for hours Tuesday night on a host of topics and the time slipped away from us entirely too quickly.

My clinics were very helpful and special.  I'm very happy with the plan they came up for me, and I feel that my quality of life is such a priority.  The ideas that they come up with are things I either hadn't thought of, or hadn't heard of in years (and had not been picked up by other physicians because, I suppose, they are unorthodox).  We also prayed together which was so touching, and just what I needed. 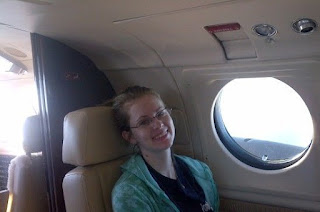 And now, here I am at home!  If I hadn't had such a massive 2 preceding weeks, it would have been as minimally taxing a trip halfway across the country as it could possibly of been on me.  Absolutely mind-blowing that we just hopped on a flight that was so selflessly offered to us, and 2 hours later we were with the doctor's I needed most in the country.  Which is well over half a day by car.  See what did I tell you?  Blessed!  Next trip to Milwaukee is to be in about four months from now, and as soon as my doctor's nurse (who is really wonderful), has dates for me \we will get set up with one and let Angel Flight know and hopefully they will be able to get us a second flight.  Receiving just the one was such a help, as flying commercial is not only expensive but it's difficult to go through security with everything, and then get it all packed on the plane and ensure it actually arrives with me.  Plus it'd be really terrible if my chair was damaged, especially to the point of no longer be able to use it.  Having to borrow a heavy hospital one immediately takes away my independence.  There's just so many things I could say about this organization that helped make me feel as though we could do this, that the doctor's I really need access to are right there, in essence! By the way, we flew directly over Toledo, OH where my well loved first dysautonomia specialist Blair Grubb practices.  We also went right by Cleveland and we could see University Circle-another place where I've received much help and will continue to for at least one more important multi-purpose surgery.

Have a wonderful Sunday everyone, and a safe week.
Milly
Posted by Milly at 10:05 AM 3 comments:

Email ThisBlogThis!Share to TwitterShare to FacebookShare to Pinterest
Newer Posts Older Posts Home
Subscribe to: Posts (Atom)
"I'm trading my sorrows for the joy of the Lord"

Milly
I rely on my faith and my Jesus to get me through the trials of this journey I'm on! I love to write, laugh with friends, play the piano, and be at the barn. I love to learn and meet new people. My passion is missions and ministry! I'm treated for a probable mitochondrial disease, and have a variety of problems stemming from it.

I used to ride horses, starting ten years ago this summer. I still consider myself a rider and horses will always be in my heart. Especially this one, Apryl! We did a lot together, and she taught me to jump hunters and cross country. She taught me a lot about riding and life!